In January (2020) we adopted a Cav Spaniel mix (Billy) from a local shelter. Within a few weeks, we noticed that one of his “baby” canines had fallen out but the adult one wasn’t growing in it’s place. We took him to our local veterinarian for some xrays and found out that the baby canine had actually broken off and was a risk of abcess. Also, the adult canine was impacted in his jaw horizontally, under his other teeth. We were then referred to Dr. Tom and East Hilliard Veterinarian’s Office.

Ann was wonderful in explaining the current curbside procedures and what we needed to do to make sure Billy was ready for surgery. Upon arrival, Dominique came out to the car to get the paperwork completed & take Billy inside. She was very friendly and Billy seemed to like her immediately. Once he was inside, we started on the 1.5 hour trip home. Dr. Tom called me within an hour to explain the exam, the plan of treatment, and the estimated costs. He was very informative, making sure we understood everything. He then was able to text me the treatment plan for my records. After surgery, Dr. Tom called to discuss the surgery and all after care procedures. Again, he made sure to thoroughly explain everything and verify that I completely understood and had no remaining questions prior to picking Billy up.

I highly recommend Dr. Tom and the East Hilliard Office. Although they are not our regular veterinarian, and we drove 1.5 hours to get there, I am extremely grateful that he was the doctor to work on our sweet Billy. There were some minor complications with the tooth extraction (some additional teeth had to be removed also) & Dr. Tom handled it and made the best decision to make sure that Billy had the least amount of pain and recovery but the best jaw strength moving forward. Thank you to Dr. Tom and his wonderful staff for making sure Billy and his humans were completely comfortable with the entire process and procedure! 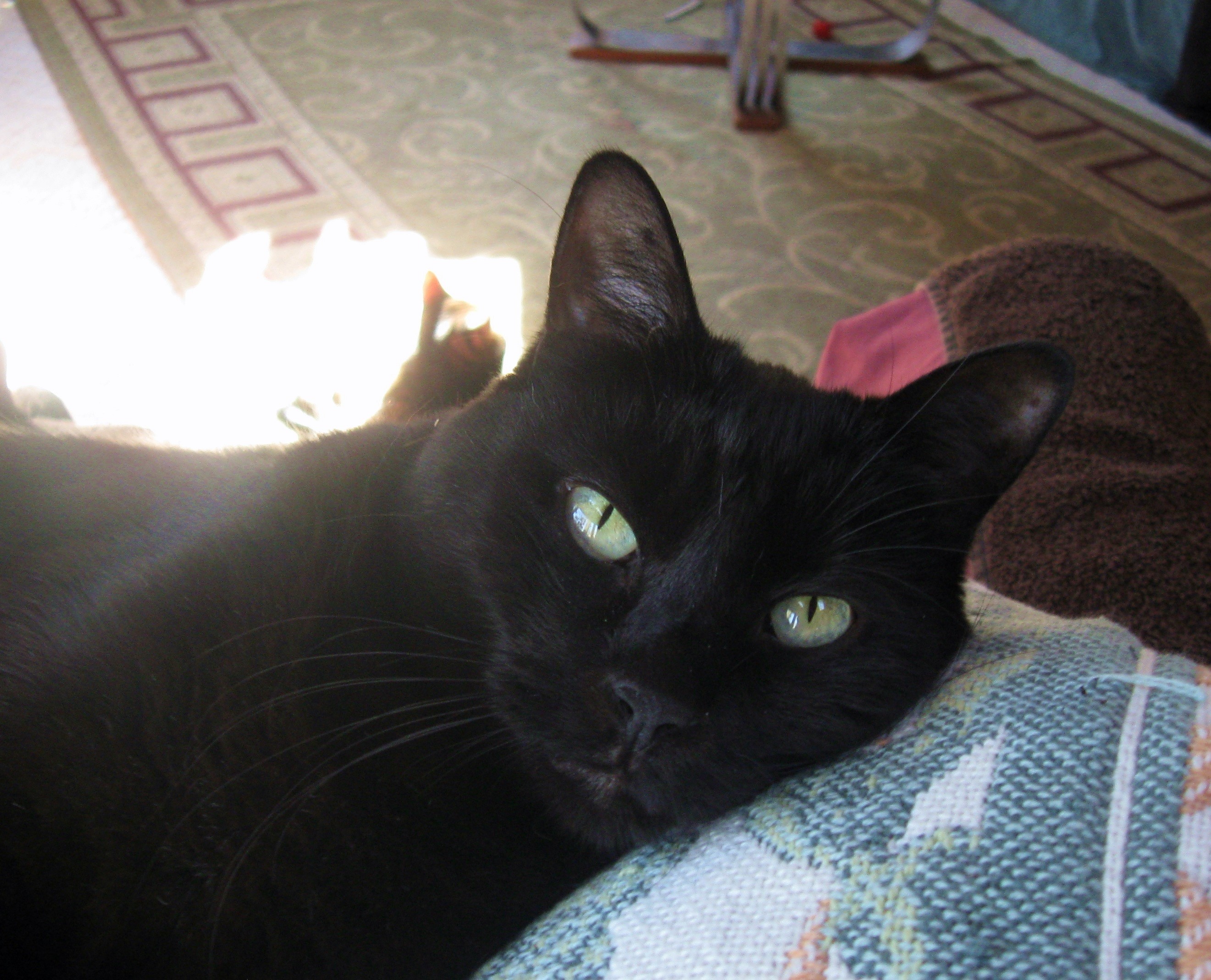 Otani, Trey & Virgil were born to a feral mom cat; we discovered them near the highway, and trapped them when they were about 9 weeks old. Unfortunately, they were a little too old to socialize fast and easy, a little too young for us to have the heart to ‘Return’ so we kept them. 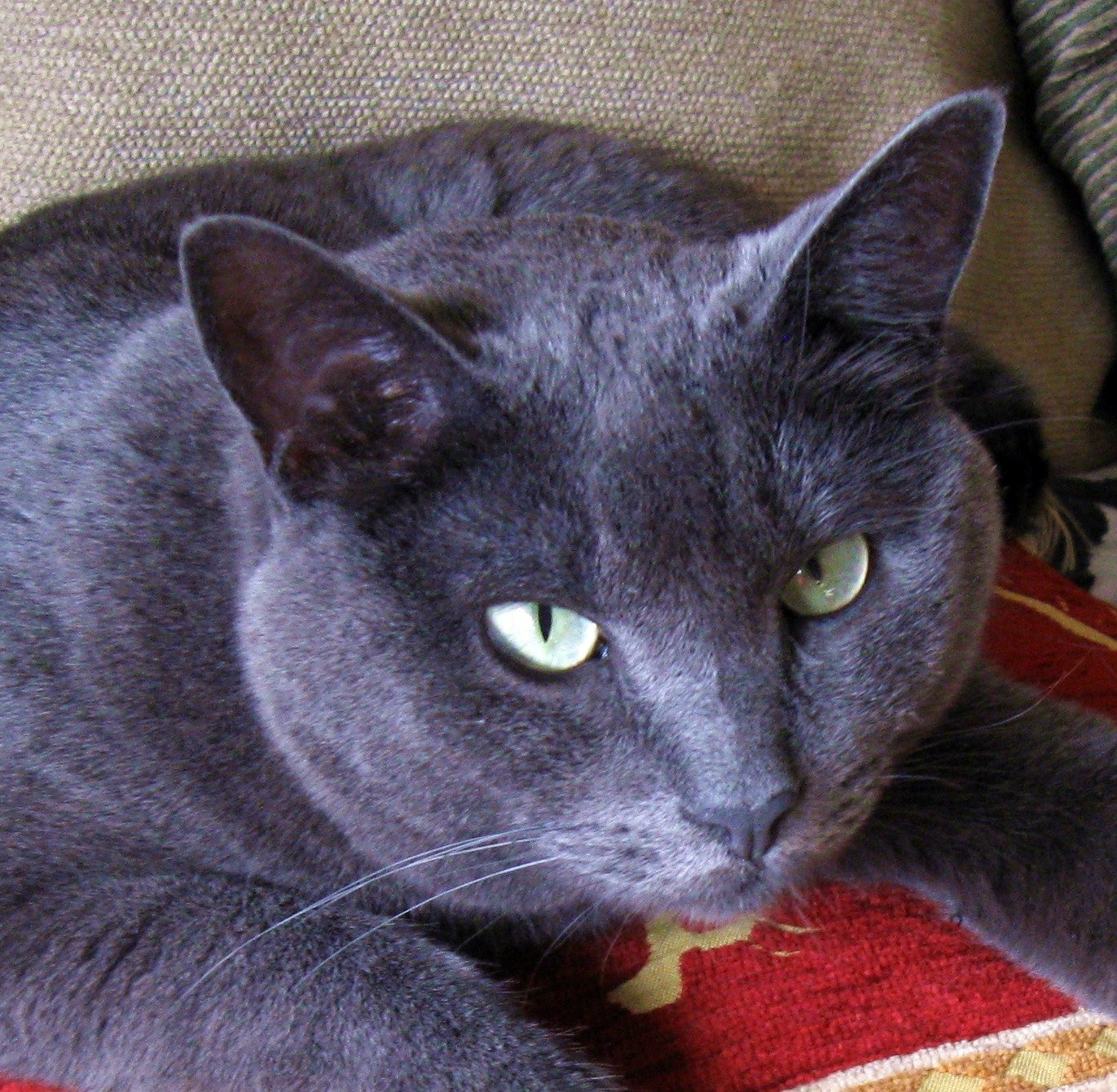 They had severe flea infestations, and heavy bartonella infections. They also had stomatitis starting at approximately 4 months of age. We took them to MedVet; they had a dental specialist there at that time, and thus started their layaway plan for a full mouth extraction. They had multiple extractions through MedVet twice. We tried prolonged courses of antibiotics, steroids, and we put the whole household on a limited ingredient diet for a year, but their stomatitis persisted. 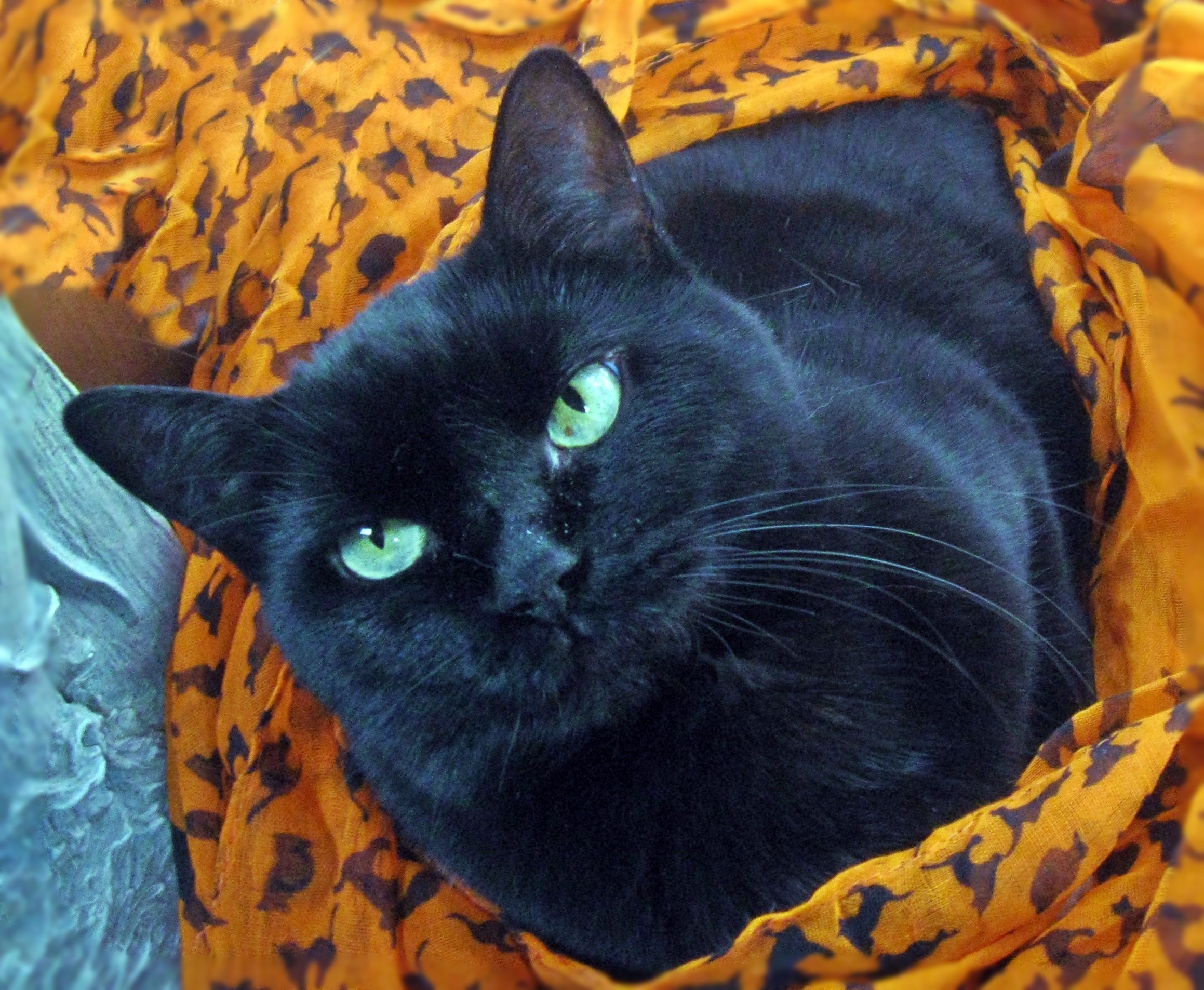 Dr. Klein extracted their remaining teeth in (2014?? ) – all three cats came home with me the same day as their surgery, cleaned their plates that night, and at every meal since. The inflammation never returned, and their personalities continued to blossom, though they are now senior cats. 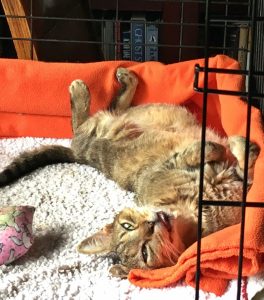 History: abandoned in an apartment for an unknown period of time, Dobie was emaciated, dehydrated and severely anemic when we found him. In addition, he is FIV +, and had a blood parasite infection. How many strikes is that? 🙂 He was 6 pounds when we took him. Now he is over 9 pounds.

Although on exam, his teeth and gums looked pretty good with the exception of one upper canine tooth, Dobie appeared painful on both sides of his mouth when eating. He is a textbook example of why ALL of our dental patients need dental radiographs! He ended up needing all teeth extracted except his incisors. 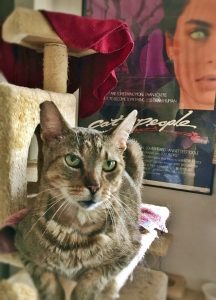 By Day 2 after his surprise nearly full mouth extraction, Dobie is grooming himself, making use of the highest shelves in the cat playroom, and back up to speed eating his 6 meals of canned food per day! He feels great. (AND he’s up for adoption – big selling point: he’ll never need a dental)

I call Dr. Tom and the rest of the East Hilliard Veterinary crew the veterinarian’s veterinarians. When it comes to my own cats’ oral health needs, they are the only ones we go to.

Buddy the Boxer is almost ten years old. He is a handsome fellow and a hard working watch dog who takes his job seriously. He is a loyal and trusted family member
who generally makes responsible decisions. 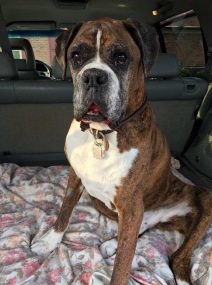 In his earlier years Buddy began to develop a medical condition called stomatitis. This is where his immune system attacks and destroys gum tissue where it contacts the tartar on his teeth. It causes mouth sores, bleeding and loss of teeth. At first, teeth cleanings were sufficient to keep the condition under control. Even so, some teeth still had to be removed. Over time his condition accelerated and became more difficult. Antibiotics provided some relief between cleanings. However those also became less effective. I was told that full removal of all teeth was the only known “cure” but I hesitated, hoping that he could keep his teeth if possible.

It didn’t work out in our favor.

Even with treatment Buddy’s condition worsened to the point where he left blood in the water bowl just by taking a drink. He drooled excessively, leaving a mess where he lay down and shaking his head to deliver a nasty shower of dog goober on anything or anyone within range. From TV screens to eyeglass lenses and especially dress clothes – nothing was spared. At one point we were wiping his mouth every 15 minutes when he wasn’t sleeping and it hurt him to put pressure on his mouth for the wipe. A roll of paper towels lasted two or three days. It was cleanup all the time. He continued to lose weight and didn’t enjoy eating at all. Something had to be done. We had reached a point where treatment was becoming ineffective. He was bleeding and losing weight. He probably would not survive for long if this health decline continued.

Full mouth extraction is serious business and best left to a specialist. My veterinarian recommended Dr. Tom Klein at the East Hilliard Veterinary Services to take Buddy as his patient. Dr. Klein has a reputation for his dental skill and knowledge.

After a few visits we scheduled a day on the table to get the teeth removed. But instead of getting his teeth removed we got some really bad news. Buddy’s heartrate was so irregular that he might not survive the operation and the anesthesia. This was confirmed by a cardiologist on site. This really surprised me so I’m glad they thought to check it first.

So now Buddy may die slowly of starvation and bleeding or he may die on the operating table. I was forced to decide between maybe dying and probably dying.

I chose maybe dying and now I’m glad I did.

We took some time to build him up for the operation. He got heart medicine and antibiotics to improve his heartbeat and immune condition. Lots of love and prayer, too. His heart improved in the meantime. It improved enough that he might make it through ok.

I was a mess the day of the operation. I took the day off work because, well because we didn’t know how it would turn out.

The three hour and forty minute surgery actually went well. He came out of surgery with zero teeth, a big, big buzz and a toothless smile (see photo). When he got home he dropped at the first comfortable spot and slept there for the next 13 hours. 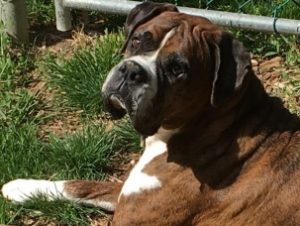 It’s all been positive since then.

He has no more mouth pain and eats better with no teeth and healthy gums than he did with teeth and bad gums. He has a lot more energy and honestly he seems like he is now two years younger. We are also celebrating that his drool level is about one tenth of what it was before. And no bad breath.

Buddy is enjoying his newly found popularity. For a while there, Mr. Goober Slinger went through a long “not so popular” phase that a great guy like him doesn’t deserve.

I’d like to thank Dr. Klein and East Hilliard Veterinary Services for the thoughtful care that Buddy received. It was competent and thorough and I feel like Buddy got the best care available.

Truly, my best friend got a new lease on life and that was the best possible outcome.
– Lee Ryan

The staff at East Hilliard are the best! Friendly, professional and knowledgeable, they’ve answered every question I’ve had for our two cats and... read more

We have trusted Dr Klein with four of our pets over the years and could not be happier with the results. Everyone in the office is super helpful and... read more

The doctors, techs, and office staff are awesome! Our dogs love going to the vet! They are well cared for by all. They take extra special care of... read more

Great place. Love the service I receive here for my rats. The staff is friendly and helpful and will follow up to make sure your pet is doing... read more

The staff at East Hilliard are the best! Friendly, professional and knowledgeable, they’ve answered every question I’ve had for our two cats and send us reminders about upcoming appointments and vaccinations. A first-class organization I’m happy to do business with!

We have trusted Dr Klein with four of our pets over the years and could not be happier with the results. Everyone in the office is super helpful and friendly which helps make even the difficult decisions easy. I couldn't recommend them more if you are needing a trustworthy vet to care for your pet.

The doctors, techs, and office staff are awesome! Our dogs love going to the vet! They are well cared for by all. They take extra special care of one of our dogs that needs special attention.

Great place. Love the service I receive here for my rats. The staff is friendly and helpful and will follow up to make sure your pet is doing alright. Services are also very reasonably priced. Great vet!

Accessibility by WAH
Call Us Text Us